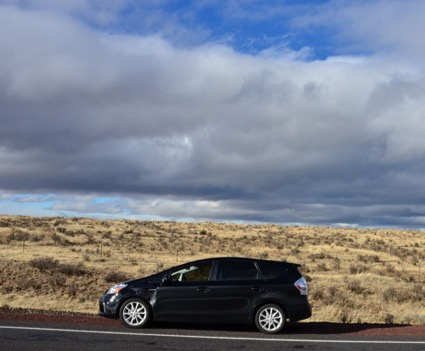 The truly magisterial thing about life is that, when you wake up each morning, you can never be completely certain about what the day has in store for you. This applies to President Obama, Pope Francis, a weird guy I hired to rake leaves at my house last week and to me too. Today is my birthday. I’ve had quite a few of these before, so I had some idea what to expect—a few presents, a little extra affection from my family, greetings and salutations from friends, relatives and some people I’m Facebook friends with but can’t remember why, and a slice or two of homemade Pecan pie. Not bad right? Today, I got something a little extra. A Chevy Impala.

A couple of weeks ago, while driving on a lonely country road after dark outside Baker City, Oregon, my wife hit an absolutely gargantuan elk. Actually, it would be a bit more accurate to say that HE hit us. She slammed on the brakes and he sort of bounced right off the driver’s side door like a hockey player who had just been on the wrong end of a hard check. As she screamed and my kids cowered in fear in the back seat, the beast sort of hopped right back up off the ground and trotted off on his merry way. (I’m guessing he was probably late for an AA meeting, but I can’t be sure.)

We had just purchased this car, a 2013 Prius V, a bit more than a week before. She couldn’t bear to venture out into the cold, starry night to assess the damage, so I took the part. The beast had left its mark—a largish dent—but we were lucky: no one was hurt and the car seemed to run. Good thing, because we had no cell phone signal and were at least an exit or two past the Middle of Nowhere.

It wasn’t Jen’s fault. Her reaction time was pretty swift. But we couldn’t claim we hadn’t been warned. Just 15 or 20 minutes before, I had been pulled over for speeding by a local cop. 76 in a 55, he said. But bless his heart—he let me off with a warning: “There’s a ton of deer and elk out here,” he said, “And they’re especially active at this time of year, so be careful.” My wife took over driving, slowed down to 55, and….we still hit the godamn elk. Shit happens.

A local auto body shop estimated that it would take 5 days to repair, once they got the parts, and the cost would be only about double what any reasonable person might guess. (Thank heavens for USAA and $250 deductibles) Our insurance would cover the cost of an economy car rental and I was told the car rental guy would meet me at the body shop at 9 a.m. on November 9—my birthday.

The car rental guy was wearing a business suit. No one wears a suit in Bend, Oregon and anyone who does is automatically suspect. And he was 25 minutes late. I gave him a bit of a hard time, mentioning that I had to get to work.

When I’m in an affable mood, I don’t mind admitting that I’m a journalist. But it was Monday morning and I wasn’t in the mood to answer the inevitable follow up questions—what kind of stories do you write, what publications do they appear in, is it hard to make a living doing that and so forth. My fallback occupation—one that usually kills conversation faster than saying you’re a child molester looking for work in the early childhood education field—is accountant.

Aside from that fact that it is inherently uninteresting, the other good thing about accounting is that it seems like a legitimate occupation, one that a person could plausibly need to get busy with on a Monday morning. I’m a freelance writer who works from home. The truth is that I pretty much do whatever the hell I want. The 25 minutes I spent waiting for this guy might have been wasted anyways (hello Instagram!) and it wasn’t like I had a clock to punch. Freelance writers really have no business being in a hurry to go anywhere, let alone back to their home office.

Freelance writers may be essentially useless—the hard truth is that we serve no absolutely critical purpose in the universe—but people are still fascinated by what we do. You can never simply tell someone you’re a freelance writer and then move on. No, you must justify your existence. Not so for accountants. All apologies to my friends in this field, but no one gives a damn about accounting. No one, it turns out, other than the two people who happened to be in the car with me on this particular morning.

“Are you a CPA?” said the car rental guy, whom I’m going to call Trent henceforth.

“Umm, yeah,” I said, unsure how to continue the lie.

“I have a cousin who’s a CPA,” said the guy riding shotgun. “Where do you work?”

“Who are some of your clients?” asked Trent, who was growing more annoying by the syllable.

“Clients? Oh God, I have a lot of clients,” I said, hoping to God they would stop asking me questions about my fictitious occupation.

The CPA interrogation mercifully ended, and shotgun guy insisted that I go first as we pulled into the parking lot. “You have a job to get back to, and I don’t,” he said. And so, Dave Seminara, the really busy CPA, stepped up to the counter and Trent examined my driver’s license without noting that it was my birthday. But still, he had “good news” for me.

“I’m giving you an upgrade,” he said. “A big upgrade actually. This car—it’s two categories above what you’re supposed to get. USAA covers an economy car. This is a full size car you’re getting.”

The suspense was killing me. I had to know what this magical ride was going to be.

“What is it?” I asked, in breathless anticipation.

Images of luxury vehicles danced in my head as I followed Trent, loping about in his ill-fitting suit, out to the parking lot.

“There it is,” he said, pointing at a grey Chevy Impala that resembled the kind of cop car a down-at-the-heels municipality might buy.

Ah, the dreaded Chevy Impala. Car rental companies are always trying to pawn Chevy Impalas off on me. Was I born with some invisible tattoo, legible only to car rental clerks, reading: Stick me with an Impala?

I have an irrational hatred for Chevy Impalas. Why? It’s hard to explain or justify but they simply aren’t cool. (When you’re a certified public accountant, or someone pretending to be one, you have a rep to uphold, OK?)

“So you’re saying that my ‘big upgrade’ is to a Chevy Impala?” I asked.

“It’s a full size car,” he repeated. “You were supposed to get economy.”

“Well….” he stammered, “We don’t actually have any economy cars at the moment.”

“But that’s a small SUV, you’d have to pay extra.”

“OK then, I’ll just take any other car you have. Anythingbut the Impala.”

“There’s nothing else, unless you want to pay extra…. wait a minute,” he said as a guy driving an even shittier looking sedan pulled into the parking lot. “This guy’s bringing back a Dodge Dart. Now, we’d have to clean it, which will take more time, but I could give you the Dart.”

Would you like a Dodge Dart or a Chevy Impala? Hmm. Dart or Impala. What a Truly Terrible Choice. Would you like to have your scrotum nailed to a tree or to a cobblestone street in Red Square? Do you want to vote for Hillary Clinton or Donald Trump? Genital warts or Herpes Simplex IV?

As I said at the outset of this story, life is a serendipitous enterprise. Forrest Gump and his box of freaking chocolates and what not. Faced with the prospect of waiting an unspecified period of time to get a Dodge Dart, the already-ready-and-waiting Chevy Impala started to look pretty good. In a span of seconds, I had transcended my Irrational Hatred of Chevy Impalas. And so, there I was, standing in a patch of sunlight in a parking lot in Bend, Oregon—43 years to the day after I was born—feeling rather OK to be ALIVE and about to step on the gas pedal of a Chevy Impala.