Dave Seminara is a writer and former diplomat based in St. Petersburg, Florida. He is the author of four books. Mad Travelers: A Tale of Wanderlust, Greed and the Quest to Reach the Ends of the Earth (June 1, 2021) is a deep exploration of wanderlust, focused around the true story of William Baekeland, a young Brit who conned many of the world’s most traveled people as they sought to reach the planet’s most remote and off-limits places.

Footsteps of Federer: A Fan’s Pilgrimage Across 7 Swiss Cantons in 10 Acts (March 2, 2021) is an award-winning account of Dave’s travels across Switzerland in Roger’s footsteps. Dave’s second book, Breakfast with Polygamists: Dispatches from the Margins of The Americas (2019)  is a collection of more than three dozen travel-related stories from 10 countries across The Americas.

Bed, Breakfast & Drunken Threats: Dispatches from the Margins of Europe (2016) is a collection of 27 travel stories that unfold across 20 European countries. The book was a number one bestseller in Liechtenstein, Malta and various other micronations he prefers not to brag about.Dave has won various awards that he’s pretty sure you’ve never heard of, so let’s not waste time talking about that either.

Dave was born in Buffalo, where he grew up listening to shortwave radio and rooting for doomed sports teams. (He retains a 716 area code despite not living there since 1990.)

After receiving a bachelor’s degree in International Business from Villanova University, Dave joined the U.S. Foreign Service. His diplomatic career included numerous international incidents during stints at American embassies in Macedonia, Trinidad and Hungary, and in the Bureau of Central African Affairs in Washington, D.C.

Dave lives in St. Petersburg, Florida with his wife, Jen, and their sons, Leo, 12, and James,10. Circa Orbem. 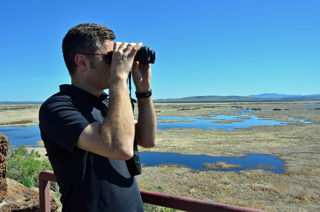