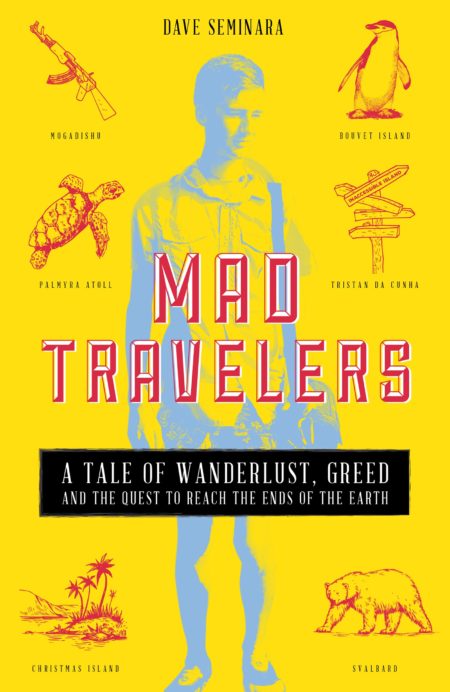 At twenty-three, William Simon Baekeland was well on his way to becoming the world’s best traveled person. The billionaire heir to a great plastics fortune had already visited 163 countries, but his real passion was finding ways to visit the world’s most challenging destinations—war torn cities, disputed territories, and remote or officially off-limits islands at the margins of the map. He earned rock-star status in the world of extreme travel by finding ingenious ways to bring the world’s most widely traveled people to difficult-to-reach and forbidden places. But when his story began to unravel, an eccentric group of hyper-well-traveled country collectors were left wondering how they had allowed their obsession to blind them to the warning signs that William Baekeland wasn’t who they thought he was.

Mad Travelers: A Tale of Wanderlust, Greed and the Quest to Reach the Ends of the Earth delves deep inside the subculture of country collecting, taking readers to danger zones like Mogadishu and geographical oddities like Norway’s nearly impossible-to-reach Bouvet Island. Along the way, this raucous tale of adventure and international intrigue illuminates the perils and pleasures of wanderlust while examining a fundamental question: why are some people compelled to travel, while others are content to stay home? Mad Travelers is a perceptive and at times hilarious account of how the pursuit of everywhere put the world’s greatest travelers at the mercy of a brilliant young con man.

“A revolutionary insight into the mindset of the modern traveler. Full of fascinating stories of adventure that don’t hold back on the darker aspects of the reality of wanderlust.” –Levison Wood, author of Walking the Nile

“A fascinating account of an extreme, obsessive travel subculture and a brilliant young con man who fleeced its members while masquerading as an upper crust English billionaire. This book is essential reading for anyone with terminal wanderlust (like me) and those who puzzle over our psychology.”  —Richard Grant, author of American Nomads

“This madcap, hard-to-put-down tale gets to the heart of the big question: why do we travel? And why are some people so wild with wanderlust? Dave Seminara’s wonderfully written tome detailing the untamed lust for travel is a superb story to get lost in.” —David Farley, author of An Irreverent Curiosity: In Search of the Church’s Strangest Relic in Italy’s Oddest Town.

“Dave Seminara has written a gripping detective story that is also a fascinating history of, and meditation on, the powerful attraction of travel.” –Thomas Swick, author of The Joys of Travel: And Stories That Illuminate Them

“Mad Travelers is a strange and delightful tale. William Baekeland, a swindler and world traveler extraordinaire with an honest case of wanderlust, is masterfully dissected. By the end, I was examining my own rambles with a fresh perspective. Take this book on your next long flight–preferably to someplace way, way off the beaten path.” –Noah Stryker, author of Birding Without Borders: An Obsession, a Quest, and the Biggest Year in the World

Dave Seminara, himself an esteemed collector of passport stamps, has assembled a tale almost too delicious to be true. Part globe-hopping adventure (across seven continents), part detective story (on the trail of a posh, Ripley-esque scammer), and part examination of the murky world of obsessive travelers (seeking immortality via their own slice of terra incognita), this book reads like a missing season of Parts Unknown in which Anthony Bourdain visits a dozen Fyre Festivals. –Mark Adams, author of Turn Right at Machu Picchu: Rediscovering the Lost City One Step at a Time

“This is a book about the crackheads of travel. The obsessives. The compulsive. The people with a problem. Normal people take their vacations in Cancun. Or Italy. Or Tahiti. And then there are the weirdos who pencil in a week in Mogadishu. Or a grueling trip to an obscure island in the Chukchi Sea. Seminara’s tale isn’t about geography. It’s about the obsession that drives people to the ends of the Earth.” –J. Maarten Troost, author of The Sex Lives of Cannibals: Adrift in the Equatorial Pacific 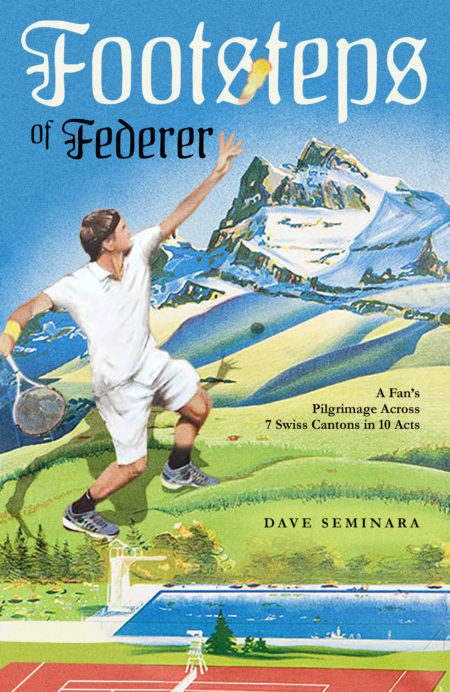 Roger Federer could live anywhere in the world, but he always returns to the place he loves most: Switzerland. Dave Seminara is a mad traveler and tennis lifer who has written about Federer for The New York Times and other publications. A pair of autoimmune diseases and a knee surgery kept Dave from playing tennis for years, but as he inched toward recovery, he had a bright idea: why not start his tennis comeback on hallowed ground—courts that his hero Roger Federer has graced in Switzerland.

Footsteps of Federer is a funny, novella-length account of Seminara’s travels across seven Swiss cantons in search of insights into Federer’s character, which is inextricably linked to his deep roots in, and love for, his country. Seminara timed his unique pilgrimage to the 2019 Swiss Indoors, where he had a chance to ask Roger a number of offbeat questions before and after Federer hoisted his record tenth title there. Seminara’s Federer pilgrimage took him to Switzerland’s most important abbey, where he prayed with Abbot Urban Federer; to the vineyard of Jakob Federer from Berneck, where the Federer clan originated from; to the stunning villa where Roger and Mirka were married; and to many of the neighborhoods and tennis clubs where Roger has lived and trained at over the years. 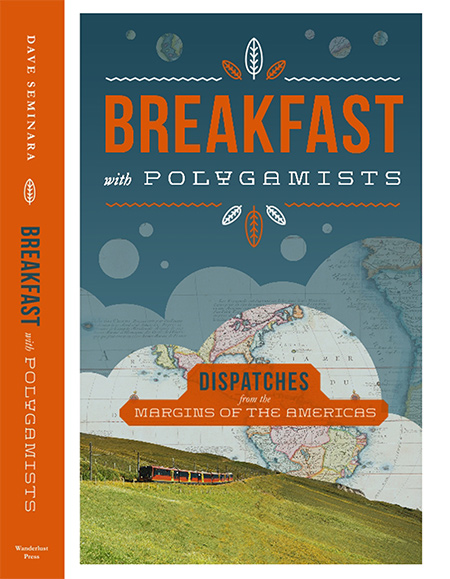 The word “travel” comes from the French word travail and the Latin word tripalium, which was a three-pronged instrument of torture in Roman times. But in Dave Seminara’s world, even the worst trips are worth remembering. Eating breakfast with cave dwelling polygamists in Utah. Following in the footsteps of Pablo Escobar, the Hatfields & McCoys, Kurt Cobain, and Justin Bieber. Visiting with swamis, witches and medicine men in Belize, Nicaragua, Chile and the Navajo Nation. Even getting deported from Argentina is better than staying home. These are just some of the adventures chronicled in Breakfast with Polygamists: Dispatches from the Margins of The Americas, a new collection of more than three dozen stories from ten countries across The Americas. Traveling as a backpacker, a diplomat, and later as a roving journalist, Seminara’s curiosity has taken him from the icy streets of Justin Bieber’s hometown in Canada to the mean streets of Medellin’s Barrio Pablo Escobar, inside Navajo hogans, hillbilly art galleries, and Nicaraguan witches’ lairs, astride the world’s biggest trees and in search of missing persons. In Breakfast with Polygamists, readers experience what it’s like to become a human ATM in an impoverished Mayan village in Belize, get conned by the Amish, join the nudists on Orcas Island, and share muffins and conspiracy theories with polygamists inside a cave home carved out of a 400 foot tall rock. 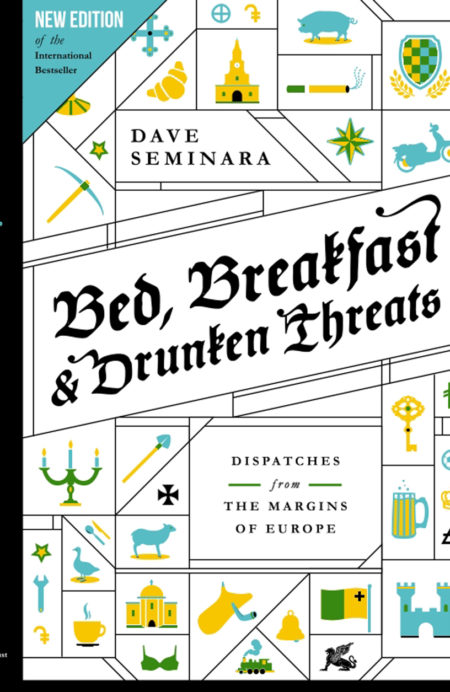 Dave Seminara created his first international incident in 1986—provoking outrage among the Maltese by dressing up like Colonel Muammar Gaddafi while representing the tiny, Catholic island nation during an 8th grade model U.N. exercise. Since then, he has spent much of his adult life trying to understand Europe. Bed, Breakfast & Drunken Threats: Dispatches from the Margins of Europe is a new collection of 22 travel stories that chronicle this quest.

Traveling as a backpacker, an American diplomat posted on the Continent, and later as a roving journalist, Seminara’s European adventures have taken him from the kitchens of the Basque Country to the Great Russian Steppes and to many forgotten places in between. In Bed, Breakfast & Drunken Threats, Seminara takes readers couchsurfing in Liechtenstein, praying with the monks of Patmos, on a quest to make peace with Malta, to a macabre goose pulling festival in Spain, inside the home of a Bryan-Adams loving tyrant in the Caucasus, on a four-day-long train ride with a pair of Uzbek prostitutes, and on a host of other journeys that unfold across 13 European countries.

Bed, Breakfast & Drunken Threats is a superbly reported collection of stories filled with humor, memorable characters, and keen cultural insights. Readers will discover why Seminara reveres Bulgarian mechanics and bus drivers in Liechtenstein, fears Greek moped rental guys and Italian soccer hooligans, and loathes French customer service and Serbs who smoke inside sealed train compartments. In Bed, Breakfast & Drunken Threats, we also learn why Seminara wishes he had Norwegian roots, envies the Basques, and maintains that the best places in Italy (Gangi) and Greece (San Michalis- population: 2) have yet to be discovered.