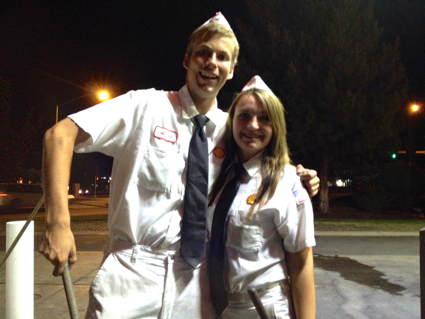 “You got any trash for me?” asked the cute teenage girl at the Shell station dressed in an all-white 1950s soda-jerk style uniform.

I thought I had heard her wrong. New to Oregon and its delightful law mandating that gas station attendants, not customers, pump the gas, I wondered what she was talking about.

“Trash,” she repeated. “Anything in there you want me to throw in the garbage?”

I am 41 years old. I’ve been driving for 25 years. During this time period I have lived in Buffalo, Philadelphia, New York, Chicago, Boston, Washington, D.C., Macedonia, Trinidad, Hungary and now Bend, Oregon. I’ve filled my tank thousands of times but no one, no one has EVER offered to dispose of my car trash.

I was so thrown off by her generous offer- for me, it was just as unexpected as if she’d offered me a back rub or a stock tip- that I froze. I could have gone into the back seat and fished out some of the junk my sons discard wherever the hell they please but I was caught off guard and instead just thanked her for the offer.

I told her and her male colleague, another clean-cut, friendly teenager, that I liked their soda jerk uniforms. They laughed.

“We hate these uniforms,” the girl said.

The young man agreed but they still let me take their photo. I didn’t take the time to go inside the gas station but a sign advertised 52 beers on draft, and I later read on Yelp that the place has good kielbasa and chicken on a stick. One reviewer noted that the owner is Kent Couch, a guy whoapparently flies around on clusters of balloons in places like Iraq. It makes perfect sense. Only someone insane enough to try that could create a gas station that it is actually worth driving out of one’s way to patronize. Is there a better gas station in the world? If so, I’ve yet to find it.