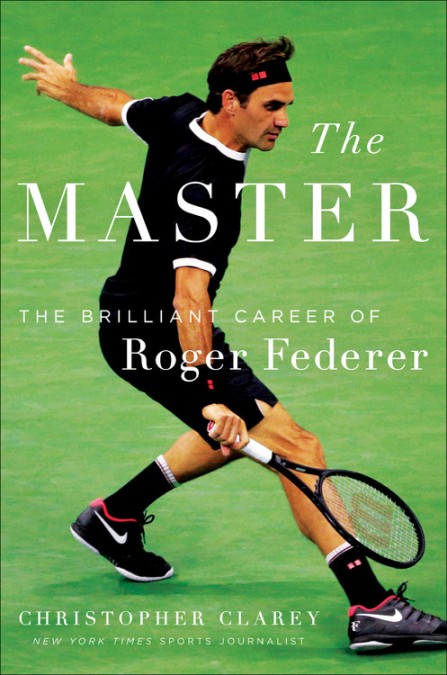 Posted at 13:48h in Uncategorized by Dave Seminara
Share

I had high expectations for Chris Clarey’s new Federer biography because I’m a huge Federer fan and because Chris has done a fine job of covering tennis for NYT for many years. But sadly this book misses the mark on many fronts and I’m shocked that its received so many positive reviews. I listened to the audiobook edition, all fifteen hours and thirty-three minutes of it, and I can tell you it was very difficult to get through! It felt like the Isner-Mahut match (in fact, the audiobook was more than 4 hours longer than that match) but was far less interesting.

Apparently, the print edition of the book is a 408-page doorstopper. Perhaps this book is geared toward the casual sports fan but I didn’t learn a single thing I didn’t already know about Roger in this tedious biography. In Clarey’s defense, writing a biography of Roger Federer is no easy task, because Roger divulges only what he wants others to know, and his inner circle guard Roger’s privacy vigorously. This is why when I wrote my book about Federer (Footsteps of Federer: A Fan’s Pilgrimage Across 7 Swiss Cantons in 10 Acts), I didn’t even bother requesting interviews with Roger or those in his inner circle because even if they agreed, they wouldn’t have told me anything interesting. Instead, I chose to approach the topic in an offbeat way, meeting people with vague connections to Roger, while visiting the places where he’s lived and practiced, talking to people who have no reason to be tight-lipped and trying to understand how Swiss culture shaped the man.

In any case, Federer didn’t grant Clarey an interview for the book, so he recycles quotes that weren’t very revealing to begin with from old interviews he’s done with the Swiss master over the years. Other than the book’s length and lack of interesting new information about Roger, here are some other problems with the book.

One. Clarey tells us near the beginning of the book that he doesn’t intend to get bogged down in match details, but he does so in any case. So many blow-by-blow accounts of old matches! Do we really need to hear Clarey’s description of the passing shot Roger hit at 30-all of this or that match? NO!

Two. I’ve never read a sports biography where the author takes up as much space as Clarey did on the subject’s rivals. It makes sense to spend a bit of time on Nadal and Federer but good grief, do we really need pages on Leyton Hewitt, Marat Safin, Andy Roddick and so many other retired players? It almost felt like Clarey was trying to write a biography of an entire era in the sport rather than just that of one player. Perhaps the reason he did this is because Safin, Roddick, Sampras and others granted him interviews for the book while Roger did not. But I didn’t find anything those retired players said about Roger interesting or revealing in any way and I had no interest in rehashing their personal stories. I bought the audiobook to hear about Roger not Marat Safin for God’s sakes.

Three. What I found most offensive about Clarey’s book is his asinine assertion that Federer’s “most enduring legacy” is his “billion-dollar brand” and his “financial empire.” Clarey was apparently so fond of this section of the book, he gave it to NYT to release as an excerpt to help sell the book. If Clarey interviewed 10 million Federer fans around the world, he wouldn’t find a SINGLE ONE who would say his most enduring legacy is his money or business acumen. In fact, any biographer who claims such has informed us that they don’t understand Roger and his appeal.

For decades, Clarey has been confined to strict word counts, writing for newspapers. This is his first book, and his first chance to go on and on at his liberty and he took every opportunity to ramble far too much. Finally, I’d like to provide a disclosure and recommend Rene Stauffer’s excellent Federer biography which is more concise and is better structured.

DISCLOSURE: Before I knew Clarey was working on a book about Federer, I sent him an email asking him if he’d provide an endorsement of my Federer book a few months before it came out. He said he’d be happy to give it a read, so I sent an early version of the manuscript to his house. I was shocked when I got a nasty email from him about a month later, essentially accusing me of stealing sources from him. He specifically mentioned two of the many people I interviewed for my book, and provided links to years-old NYT stories he wrote where he quoted those people. I felt his allegation was totally absurd. After all, journalists interview the same sources all the time.

A few weeks later, I found out that Clarey had his own Federer book coming out and it all made sense. I felt like he violated journalistic ethics in taking an early copy of my book without disclosing that he had a Federer book of his own coming out. Needless to say, he never gave me the endorsement either. Nevertheless, I listened to the book with open ears and my review reflects my feelings about the quality of the work, not the author.