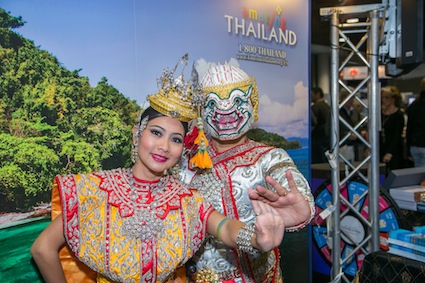 36 brochures, weighing in at a total of 4.2 pounds, 23 business cards, a flash drive from Indonesia, a microfiber cloth from Quebec, and a bookmark from Yap, a remote Pacific island where they still use stone money. That’s what I brought home from my day at the Chicago Travel & Adventure showlast week. The show featured a number of celebrity chefs, none of whom I’d heard of before, hundreds of exhibitors from places near and far, a global beats stage with folk dancing, and talks from travel industry luminaries like Rick Steves, Patricia Schultz, Pauline Frommer, Samantha Brown and Todd Carmichael.

I was there to interview Todd Carmichael and hopefully soak up a few story ideas. Wandering through the aisles, I couldn’t help but wonder why some of the exhibitors had turned up in Chicago. There were dozens of uninspiring destinations in the Midwest I wouldn’t visit even to claim a winning Powerball ticket (Come to Bumblescrew County! Home of the Second Largest Ball of Twine in the Midwest!) And then there were the truly obscure, very far away places with little hope of actually attracting Midwestern tourists. My favorite of these was the booth for Yap, a remote Pacific Island with a population of just 7,000 people.

Yapland was run by Vincent Tafileluw, a native of Yap who, according to his business card (“The Land of Stone Money”), functions as the Sales & Marketing department for the island, and Don Evans, an American who was sent to Yap by the U.S. Department of the Interior 43 years ago and decided to stay. Evans told me that the U.S. Department of Interior paid for them to attend the show and I resisted the temptation to ask if this wasn’t a complete waste of money.

I was surprised that nearly every booth had nothing to offer save brochures. (And there was just one- India- that didn’t even have those, it was just one bored looked middle management type sitting at a completely empty table looking bored.)

I took 36 brochures and was actually pretty selective. Here is what I learned from these: Yap is the Pacific’s secret paradise; Nevis is the most enchanting little island in the world; New Zealand has a 380 km wine trail, or so said an Aussie working their booth (Treason!); the Canadian province of Ontario has a northwestern corner, which has its very own brochure; Quebec uses really good paper stock; there are 9 Native American tribes in South Dakota, each with their own casino; Fairbanks, Alaska hosts an event called the World Eskimo Indian Olympics; Brown County, Indiana is a place where escape comes naturally (unclear if there are any federal or state penitentiaries there); Crested Butte, Colorado is incomparably real, abundantly real, joyfully real, unpretentiously real, prominently real and so on; and an adventure awaits you- yes you!- in Southwest Colorado.

I also learned that Azerbaijan is now promoting itself as a “Land of Fire” and a “Land of Tolerance.” Not sure about the former, but I took issue with the later, relaying a tale of how I, 13 years ago, I was pulled off of a Tblisi-Baku train in the middle of the night at the Azeri border and tossed off said train for not having a visa. (My guidebook erroneously claimed that I could enter with a Georgian visa)

“You should come back, and try again,” said a kind, blue-eyed woman manning their booth, after listening to my story.

I also made friends with a guy staffing a booth for Moab, Utah, telling him about a story I wrote on a polygamous community near there last year. He had heard of the place but didn’t know where it was, and when I unfolded the maps they were giving out and showed him how to get there, his female colleague looked around nervously. Apparently polygamy isn’t an officially sanctioned attraction for people tasked with promoting tourism in the state of Utah.

At lunchtime, Mexico, which alongside Costa Rica had the largest booth in the place, trotted out a mariachi band and hundreds of hungry freeloaders lined up for plates of what appeared to be microwaved taquitos. Maybe it was the mournful mariachi tunes but no one looked very happy; it looked like chow line at a Third World prison. And speaking of freeloaders, at the Saint Lucia tourism booth, I overheard a creepy looking middle age man in a trench coat begging for a free trip.

“I’m a travel writer, do you guys have press trips?” he asked, by way of introduction, with no lead up or small talk.

“Who do you write for?” asked the woman manning the booth.

“I have my own blog,” he said, putting himself in select company alongside approximately 4.2 billion other persons on the planet.

She promised to pass his business card on to their P.R. firm and I surreptitiously followed the guy for a few minutes, watching him approach three more booths with the same spiel. At no point did he ask questions about the country in question, or demonstrate any interest in anything at all other than imposing his sorry ass, free of charge, on their country. Behold the modern “travel writer,” a sickening little con artist who will shill for this place or that on their pathetic little travel sites, read by no one. I wanted to hand the guy a coffee cup and a “Will Type for Free Trip” sign.