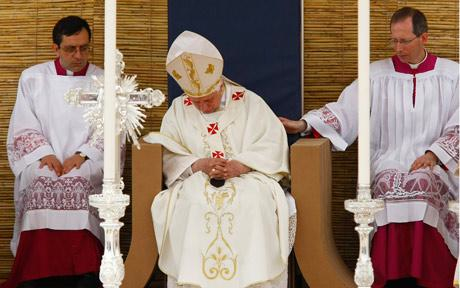 26 Apr Mass Should Last an Hour. And Not a Minute More

The news this week that Pope Francis told a woman married to a divorced man that she had the right to take communion had me thinking about another initiative I’d like to see the Pontiff tackle: streamlining mass. Don’t get me wrong- I’d also like to see the Pope, whom I adore, give priests the right to marry, send out the green light on contraception, and go a little easier on gays. But let’s start with something a little easier, shall we: a one-hour limit on mass.

I’ll be the first to admit that I’m not a very good Catholic. Years have gone by when I didn’t so much as slow down while walking by churches, let alone venture inside. But my wife, who grew up Baptist, recently became a Catholic, effectively stripping away my excuse for avoiding Sunday church services (I can’t go to a Baptist church! I’m Catholic!) in one fell swoop.

My mom dragged me to St. Gregory the Great Church in Williamsville every Sunday of my childhood. I tried to mitigate the inconvenience of this Holy Obligation by lobbying to attend masses said by Monsignor McNamara, or “Father Mac” as we called him. Father Mac was not a charismatic or eloquent priest. I cannot recall a single homily he delivered or anything else about the man other than one thing: he was fast. Man, was he fast. He mumbled a lot and often times I had no idea what he was talking about. The guy would stand at the lectern and ramble  incorrectly  for a few minutes and afterwards, I would turn to my father and say, “Hey, was that a 4 minute homily?”

None of it made sense, but the man was a legend in Williamsville-area Catholic circles because he had the magical ability to get us in and out in about 40 minutes. Sometimes less.

But even when I couldn’t get Father Mac, our masses almost never exceeded an hour, save for Easter and Christmas. And that was doing things the Joanne Seminara way, too. I had friends with progressive parents who would walk out during the final hymn, and a few really, really enlightened ones who would march straight outside from the communion line. But not us. Oh no.

“You can’t leave until the priests have left the altar,” my mother would scold if we had the audacity to start getting our coats on after communion.

These days, I’d like to believe that I get more out of going to mass than I did when I was a kid. I don’t mind having an hour to reflect on my spiritual life, whilst attempting to prevent my little boys from gouging each other’s eyes out and fending off or acquiescing to their repeated demands to play Angry Birds on my iPhone, depending on how annoying they’re being. But an hour is about all I can do.

I like the priests at the church we go to. But for some reason, they seem totally incapable of wrapping things up in an hour or less. True, on most occasions, it’s only another 5, 10 or 15 minutes, but for me, every tick of the clock past the one-hour mark feels like an eternity to me. A few weeks ago, we actually didn’t do the handshake until the one-hour mark. For me, the handshake is always the barometer. If we don’t shake hands by the 45-minute mark, I know we’re in trouble. On this occasion, as the clock ticked toward the one-hour mark, I just kept thinking, “We haven’t even shaken hands yet!”

The priests are only part of the problem. The real time suck is the choir. Yes, I know, these people are volunteers and they have wonderful voices and they are so dedicated, blah, blah, blah. Ok, all of that is true. Maybe if they were singing Neil Young’s “Barstool Blues” or The National’s “Fake Empire,” I could enjoy it. But the tunes sung at Catholic masses are tedious, tired, and not inspirational in the least. It’s the same old stuff we’ve been hearing for decades. I don’t expect them to bust out “I’m Up all Night to Get Lucky,” but, I don’t know, could we maybe get the theme to Chariots of Fire?

A couple weeks ago, my wife officially became a Catholic at our parish’s Saturday night Easter Vigil. She had warned me that the service might last two hours. Two hours! And a friend told me that he had been to an Easter Vigil that went three. Not one, not two, but three hours, folks. My saving grace was the fact that this event commenced at 7:30 p.m., just a half-hour before my sons’ bedtime.

“The kids can’t possibly stay up for the entire mass,” I argued.

My wife threatened to hire a babysitter, but eventually I prevailed. The boys and I caught the first 45 minutes and took a cab home. When my wife came home more than 3 hours later, I knew we’d made the right call. One of the priests told her he was disappointed by the tepid turnout for the vigil.

“It’s only once a year,” he argued. “I don’t see why people can’t stand a longer mass. You don’t see people leaving a hockey game when it goes into overtime, do you?”

Indeed, you do not hear complaints about extra innings or overtime. But let’s face it, sports are different. You bought a ticket. You want to know the outcome of the game. And there are snacks. And beer. Sometimes cheerleaders, too. We aren’t going to nod off during extra time of a tie game, but even Pope Benedict fell asleep at mass at least once.

My proposal? A new Dominoes-inspired guaranty straight from the Vatican. One hour mass or you get your contribution back. Should there be a shot clock behind the altar? Or a horn, buzzer or bell that sounds at the one-hour mark? Pope Francis is a genius, so I’m going to leave those details to him. If we can put a man on the moon, we can celebrate mass in an hour or less.

Footnote: It is indeed true that I once woke up in the middle of the night to attend a 4-hour long Orthodox service in Greece. But that was work.