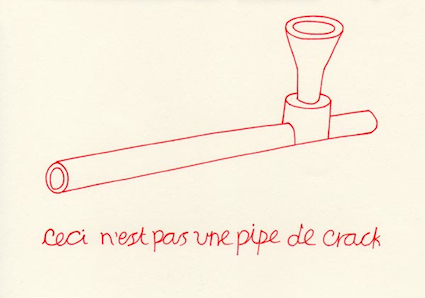 26 Nov Advice for Crack Smokers: Leave Pipe at Home for Day in Court

If you’ve spent any time on this blog, you’ve probably noticed that I sometimes like to share nuggets of wisdom with you, my dear readers. Here’s a tip I learned from reading a story in theBuffalo News today: if you’re on your way to court as a defendant in a drug case, it’s probably best to leave your crack pipe at home. Richard E. Thibault, a 54-year-old resident of the West Side of Buffalo, got caught trying to stash his crack pipe in some shrubs outside the courthouse.

“Yeah, that’s my pipe, but it’s only got some used crack in it,” Thibault said.

Speaking of crack, I learned today, thanks to an informative post over at Grantland, that my favorite crack-smoking mayor, Rob Ford, once bested Hulk Hogan in an arm-wrestling match, and also recentlyhired a convicted steroid dealer to help get in shape. It’s almost a full time job keeping track of Monsieur Ford. I have to admit, I’m a Rob Ford addict. I’ll be sitting at my desk, trying to get some work done, and a thought will pop into my head: I wonder what Rob Ford is up to today. And then, before I know it, I’ve passed an hour watching Rob Ford videos on You Tube. (My favorite is this one, where Ford goes off on a Globe & Mail reporter who called him a “fat fuck,” but there’s a nice top ten list here with some other gems as well.)

One final news note for today: Rush Limbaugh is an ignorant bastard. You already knew that though, right? The World Health Organization mistakenly claimed, deep in a 188 page report that few would have otherwise read, that Greeks were purposely infecting themselves with H.I.V. to collect benefits. They later corrected the mistake, but before the retraction Limbaugh pointed to the story as proof of “what the welfare state does to people.” In fairness, he wasn’t the only one duped by the error (hello Al Jazeera, Sky News, Fox Business News and the Drudge Report, any editors home for the holidays?) but it’s more fun to make fun of him than the news outlets that ran with the story. How could anyone believe that people would purposely give themselves H.I.V. to get benefits of about 700 euros per month?

According to Slate, this is what Limbaugh said on his show:

“It’s all the fault of government, according to the UN.  It’s all the fault of the Greek government.  So the people — ignorant though they are, blissfully ignorant though they are — they’re always victims, they are always innocent. They never have one responsibility, not one iota of responsibility in any aspect of their lives.”