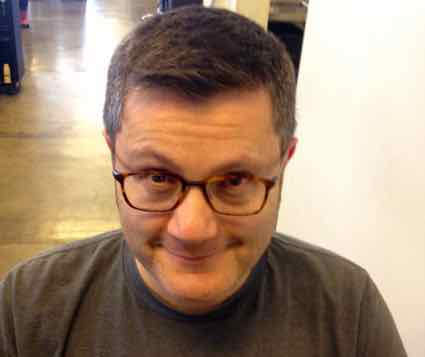 I’m cheap and I don’t care as much about my appearance as I probably should. That’s why I don’t mind patronizing beauty schools, where you can get a haircut—and sometimes a shampoo—for as little as five bucks. It takes longer because the students often have no idea what they’re doing and you have to sit there while their performance, and your hair, is critiqued.

But I’m a risk-taker so I find it surprisingly enjoyable to sit down in a chair and allow an inexperienced youth with scissors and a razor have a go at my hair. Anything can happen and aspiring stylists usually have good stories. Many are trying to transition out of dead-end jobs and are investing big money in their courses in the hopes of turning their lives around. I’ve met dozens of these aspirational types over a period of years as a regular customer at Pivot Point Academy in Evanston, Illinois, the Cosmopolitan Beauty School in Fairfax County, Virginia and a variety of other places. But I’d never gotten a cut from a convicted felon until I met Billy here in Oregon this week.

We got off on the wrong foot. He looked like Eminem and was wearing a Yankees hat backwards.

“I hate the Yankees,” I told him, as we walked the length of the room toward his poorly-lit back corner barber chair.

“That’s alright, I gotta stay true to my Jersey roots,” he said, betraying an accent that wouldn’t have been out of place during a Jersey Shore casting call. “You won’t mind after I give you a fresh cut.”

A fresh cut. OK, I thought, let’s see what you got. Like most aspiring stylists, Billy—not his real name, by the way—turned my chair around, back to the mirror, so I couldn’t follow his progress or lack thereof. He worked slowly and talked a lot, pouring his life story over me with no apparent concern even after I told him I was a writer who planned to patronize his school once a month for a year and write about each experience.

“You’re a writer?” he asked. “I used to know all kinds of writers when I lived in L.A.—Hollywood to be exact.”

“What were you doing there?”

“I managed a vegan restaurant. Lotta writers are vegans. I write poetry myself. I enter these competitions online and stuff.”

“Some of those things are kinda money making scams,” I warned. “You ever win one?”

Bit by bit, Billy revealed his winding path from the dodgy streets of Atlantic City to Oregon, via a handful of penitentiaries, Hollywood, and dozens of other places in between, as clumps on my graying brown hair fell into my face. I asked him about the tattoos that covered his brawny arms and a male classmate siting next to us interjected, “Ask him about the numbers.”

The series of numbers, Billy explained, were his inmate number from his time at New Jersey’s Rahway State Prison.

“It seemed like a good idea at the time,” he said as his friend laughed.

“Jewelry store—got a beautiful 3-carrot diamond ring, bunch of other stuff. Would’ve gotten away with it too if my mom hadn’t ratted me out.”

Billy rattled off the names of a few other prisons where he served time, including a juvenile institution where he says he got his GED at 16. He was vague on the timeline and I didn’t press, but after his last stint in prison some years ago, he spare-changed and hitchhiked his way across the country over a period of a year or two.

“Not many people want to pick up hitchhikers these days, do they?” I asked.

“I got rides but sometimes you had to wait,” he said. “Could be five minutes. Could be two, three days.”

“Men—right? Don’t tell me women picked you up?”

“They did! I hooked up with some of ‘em too. Never forget this one chick in Alabama. Total meth head. I get in the car and she says to me, “You’re not gonna kill me, are you?”

“Course not! We hooked up at her dealer’s house after she scored.”

I looked around the crowded salon at the other assorted cheapskates taking advantage of the school’s $5.99 Tuesday special. Silver-haired seniors with time to kill on a weekday morning. Stay-at-home moms. Assorted service industry workers who work nights and weekends. We were off in the corner and I wondered if any of them could hear Billy’s stories.

Nearly an hour into our cut & conversation, a husky woman in a black smock Billy called Mrs. Drew ambled over to critique his progress.

“I’m pushing him to be the best he can possibly be,” she told me after showing him a few spots that were uneven.

As soon as she left, Billy resumed his story. He spent months sleeping rough as he made his way slowly across the country. A Metra train station in Rolling Meadows, a suburb of Chicago, was his crash pad for a period of time until a commuter hired him to do some household work and put him up in a Super 8 motel for several weeks.

Billy drifted west slowly—walking across the whole of Utah, he says—and was ultimately dropped off at Skid Row in LA, a few years ago.

“You lived on Skid Row?” I asked, having just read that a homeless man was shot dead there by the police recently.

“Hell no! I’d sleep anywhere but there. On Venice beach. In parks. On top of apartment buildings.”

Billy eventually landed the job at the vegan restaurant and rose to become manager. He met a girl—a waitress he fired whom he says didn’t bear a grudge— and they had a baby together, a girl who is now 2-1/2.

“Love of my life man—my daughter, not the girl, that didn’t work out,” he explained.

The mother of his daughter moved to Oregon for school and he followed so he could be close to his little girl. When Billy told me that his daughter went to a Montessori school—at $800 month—I asked how he could afford it.

“Old lady’s parents are loaded,” he said. “Kinda hit the jackpot when I hooked up with her. My daughter is set for life.”

As the haircut dragged on with no end in sight, the conversation drifted back to hair.

“Did you learn to cut hair in the can?” I asked, naively.

He laughed. “You think they hand out scissors and razors in prison? We got a disposable Bic for fifteen minutes—once a week—and they watched us like hawks. You can’t cut hair in prison.”

Billy said that he had aspired to be a base jump instructor, showing people how to safely jump off cliffs. The only problem is that he had never actually attempted a base jump himself and had read that one needed 500 hours of instruction just to try it, which he couldn’t afford.

“You only got an 80% chance of surviving each jump,” he said.

“Those don’t sound like very good odds,” I said.

He said that he wanted to be a barber because it was the one thing he really knew how to do well.

A voluptuous blonde hairdresser-in-training wearing skin-tight black leggings sauntered by and I commented that if he was looking for love in Oregon, he was in the right place—90% of the students were women.

“Are you kidding?” he said. “It’s 98% but all the good ones are pregnant or dating somebody or both. Anyway, you don’t shit where you eat.”

“Yeah, I do. They’re country. I mean—they don’t tan. Some of ‘em don’t even wear makeup. Natural like, it’s weird. It’s cool though. Dude, your cut is looking so clean. So fresh.”

The haircut. Ah, I had been hammering Billy with so many questions that I had almost forgotten what I was doing there in the first place. Billy said that he had taken out loans to pay the school’s $11,000 tuition for the nine-month course. “You don’t have to start paying until six months after you leave,” he explained. I normally ask my beauty school stylists how deep they are into their course as soon as I sit down—I like to know what I’m getting myself into—but on this day, I had forgotten.

Billy was three months in. I was his sixteenth customer.

“They don’t turn you loose on the public right away, do they?” I asked.

“Nah, you gotta practice on models first. If you don’t mess up too bad, they give you real customers.”

Billy had an interview lined up to be a dishwasher in a brewpub that afternoon and was excited about the opportunity. I asked him if having a criminal record made it hard to find work.

“It ain’t a problem unless you make it a problem,” he said. “Know what I mean?”

I nodded as though I too had concealed a felony or two in my day but couldn’t seriously relate.

“If they wanna do a background check, I just tell ‘em I got another job offer, thanks anyways.”

I had never met someone who was so upbeat—from the moment he shook my hand it was all positive energy. You’re haircut’s gonna be so fresh! My daughter is the most popular girl in her class!Juvy wasn’t all bad, I did get my GED! S ure, I got rides from women hitchhiking—hooked up with some of them too! I had been pitying myself after tearing the MCL and ACL in my left knee but quickly felt Billy’s sunny disposition rubbing off on me. At 27, he was fifteen years younger than me but had been through a lot more and was still smiling. What did I have to complain about?

I told Billy that I wanted him to take my photo for the story and he agreed.

“Maybe you can become part of my portfolio,” he said, as if this was something for me to aspire to.

An hour-and-a-half into the haircut, Billy hailed Mrs. Drew, telling her that he was finally all done.

“This has been the longest and most difficult haircut ever,” he told her, as I wondered what was harder—cutting my hair or enduring all my questions. “He’s got the cowlick and the shape of his head—it was tough, tough.”

They spun me—the guy with the cowlick and the annoyingly shaped head around—so I could have a look. “It’s clean—it’s fresh,” Billy concluded, pre-empting me from passing my own judgment in a moment of Jersey-salesmanship worthy of a used car lot. But I had to admit, it wasn’t a bad haircut. Not by a longshot. Especially for $5.99. Although he didn’t follow through on taking my photo with his phone, so apparently he thought better of making me a part of his portfolio.