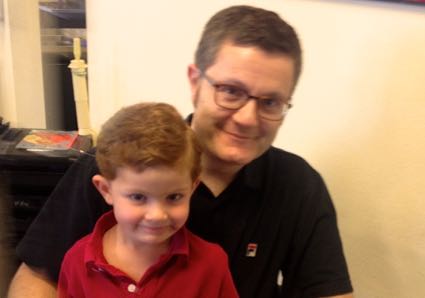 When it comes to barbers, I’ve never been very monogamous. Oh sure, I’ve had some good barbers whom I was faithful to for periods of time over the years. But something always comes between us—a long line of others waiting for the same guy, a price hike, or, in most cases, me moving away. I like to patronize beauty schools, the haircare equivalent of Russian roulette, and a month ago, I got a haircut from an optimistic ex-con named Billy. After the cut, which took a whopping 90 minutes, Billy said, “Ask for me next time, OK?”

But as much as I enjoyed Billy’s stories about his life of crime and his efforts to turn around his life, I wanted someone else for my next haircut. I didn’t have an hour and a half to spare, and besides, I plan to write a yearlong series about the haircuts I receive from various students at this beauty school. But sure enough, when I walked into the place, with my five-year-old son, James, in tow on Tuesday—cheapskates’ day when haircuts go for just $5.99—the first person I saw was Billy, still wearing his NY Yankees hat.

He was just two chairs away from Frank (not his real name), my new barber, but pretended like he didn’t notice me. Writing stories about ex-cons is one thing but snubbing their hair care services is quite another. I hoped that he hadn’t read the story I wrote about him and tried to slouch low in the chair to keep a low profile.

“You don’t have to worry about anything, cuz I’m about to graduate,” Frank told me before getting started. “I’m really good. They barely even critique me any more because I know what I’m doing now.”

Frank told me that he was “almost 50.” “Getting old really sucks doesn’t it?” he said, pointing to some of my fallen grey hairs. He had sharp features, a good head of thick, wavy brown hair and prominent eyebrows. As Frank started mowing my head with a pair of clippers he told me about the winding road that had led him to enroll in beauty school last summer. After high school, he had joined the Navy at 19 and tried to become a Seal.

“I’m a highly intelligent person,” he said. “I know that sounds like blowing my own horn, but it’s the truth. I’m smart enough to be a Seal. I could have been a Seal. But the tests you have to pass. Jesus Christ! I kinda just fell behind on the work and I didn’t make it.”

He served in the first Gulf War in Iraq and said he got gassed and shot at.

“We knew what we were doing, man,” he said. “We could’ve taken out Saddam no problem but the order never came. To this day, I don’t know why we didn’t take him out.”

Frank said he also did some kind of reconnaissance work in Afghanistan while the Taliban was still running the place in the 90s. I asked him what that meant but lost track of what the hell he was talking about as big clumps of my hair were falling like the bombs we dropped in Baghdad all those years ago.

“Hey, aren’t you going to use the scissors at all?” I asked as he mowed the top of my head with the clippers.

“Scissors?” he asked, a little confused, as though he’d never heard of them. “Nah, we’ll go with the clippers, alright?”

My back was turned to the mirror, so I had no way to assess the damage. Frank kept mowing and said that he got a medical discharge from the Navy and eventually got into construction work. He said that he didn’t like “beating up his body and working outside” so last year he decided to enroll in beauty school.

“I’m doing it for my wife,” he explained. “I gotta get her outta her job. She works at a retirement home. Only makes like nine bucks an hour. Thing is, she makes such good friends with all these old people and then they die and she’s moping around the house for weeks. So-and-so died, so and so is about to die, it’s always someone.”

And so, Frank invested $18,750 in his course, which includes three modules: hair, nails and skin. Frank said that when they first turned him loose on the public, he had no idea what he was doing.

“Trial and error,” he said. “The first couple guys weren’t real happy with my work but you’d be surprised, most people, they don’t complain.”

Cutting hair got easier but nails are still tough.

“All this crap women do to their nails, man, it’s crazy,” he said. “I don’t recommend any of it. Facials though, now facials are another story. I never had a facial before in my life but now I get them twice a month. You know, it’s not just about feeling good, there’s like a therapeutic benefit.”

When he graduates in June, Frank wants to work as a barber in someone else’s shop for six months and then strike out on his own. After about fifteen or twenty minutes, Frank thought he was done, so he summoned his teacher, a younger guy with a lot of product in his spiky hair.

“It’s not bad,” the teacher concluded, with my back still turned away from the mirror, “But it still needs some work here and here and here.”

As Frank tried to fix my hair, our conversation turned back to him getting gassed during the Gulf War.

“We still get tested every six months for Gulf War Syndrome,” he said. “I was real sick last year and I thought I had it but nope, my doctor said it was almost complete kidney and liver failure.”

“Too much booze?” I ventured.

“Yep. Doctor said it was killing me.”

Frank said he was “96% Irish.” We talked about the Olde Country and our mutual passion for Guinness Stout.

“The secret is the moss in the water,” he said. “People don’t believe it but I did a lot of research when I was over in Ireland for a family reunion. I studied it. They got moss in the pipes the water goes through over there. That’s what makes the Guinness so thick and creamy. If you wanna get your Guinness like that over here, you have to let some moss soak in it.”

A few minutes later, he told me he was done and spun me around to have a look. It wasn’t good. He had scalped me short on top but left the sides bushy, giving me a sort of modified bowl haircut. I looked like a deranged Yanomamo without the penis gourd and spear. I asked him to even it out and he obliged. But even still, I wanted the teacher to come back and go over it.

“He’s not coming back,” Frank said.

“I told you. I know what I’m doing. He showed me the spots to fix and I already fixed them.”

We were at a stalemate. At this point, Billy, who hadn’t made eye contact with me or acknowledged me sidled up behind me and started eyeing my haircut.

“Dude, I really like how you carved your initials in the back of his head,” he said, looking pensive for a minute before bursting out laughing.

“Well, at least he didn’t carve a Yankees logo on my head,” I said.

“Ah man, you guys around here. Freaking country bumpkins. Nobody likes the Yankees.”

I was relieved that Billy wasn’t acting like a jilted lover. But my hair was another story. Frank handed me the mirror again and wanted to know what I thought. Just then James, who had been getting his haircut from a woman on the other side of the room, hopped up on the empty chair in between Frank and Billy. He looked sharp and I made a mental note to try to get his stylist next month.

“What do you think of your daddy’s haircut little guy?” Frank asked him.

James pursued his lips and titled his head a bit as he mulled the question.

“Pretty good,” he finally concluded. “Now do I get a sucker?”